Right of Way Justice for Tribes

[Excerpt from our upcoming book Solutionary Rail, a people-powered campaign to electrify America's railroads and open corridors to a clean energy future.  This section was inspired by our recent solidarity trip to the Standing Rock encampment to resist the Dakota Access Pipeline.  It is authored by Patrick Mazza and Bill Moyer.] 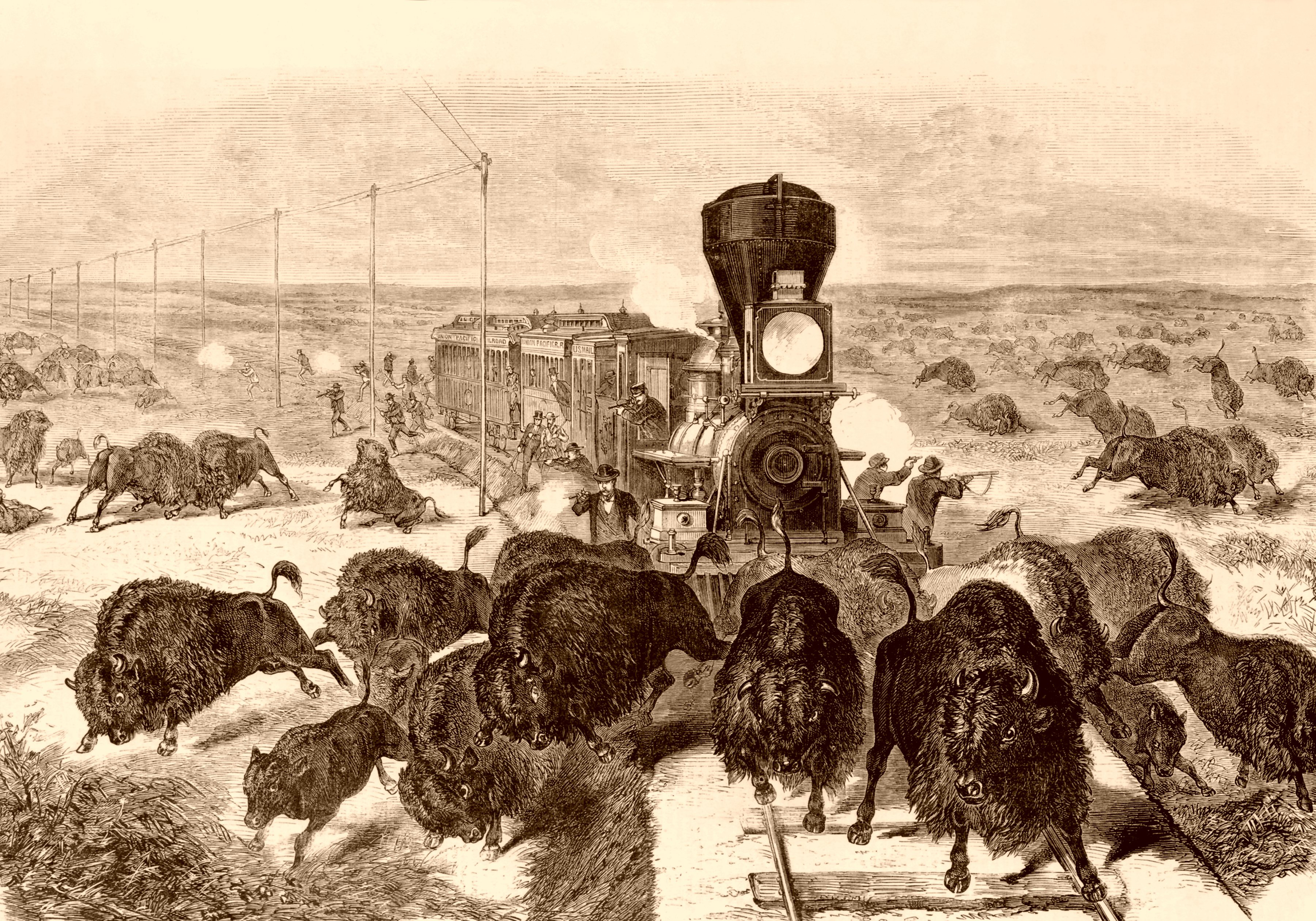 The history of US Western expansion is one of war and genocide against the indigenous peoples of this continent.  Railroads played a critical role in that conquest and settlement.  On the Great Plains rail lines cut buffalo migration routes and made the near extinction of the buffalo possible.  Railroads opened the way to establishment of towns and ranches on tribal lands in the west.    As Tom Goldtooth, executive director of the Indigenous Environmental Network says, “Railroads have been a tool of colonization, the political takings of indigenous lands and genocide. Indigenous peoples have however persevered despite all odds.”

“Gen. William Tecumseh Sherman’s first postwar command  . . . covered the territory west of the Mississippi and east of the Rocky Mountains, and his top priority was to protect the construction of the railroads,” writes Gilbert King for Smithsonian. “Gen. Philip Henry Sheridan, assuming Sherman’s command, took to his task much as he had done in the Shenandoah Valley during the Civil War, when he ordered the ‘scorched earth’ tactics that presaged Sherman’s March to the Sea . . . As the railways expanded, they allowed the rapid transport of troops and supplies to areas where battles were being waged.”

“The Transcontinental Railroad made Sheridan’s strategy of ‘total war’ much more effective,” King continues. “In the mid-19th century, it was estimated that 30 million to 60 million buffalo roamed the plains . . . Then the completion of the Transcontinental Railroad accelerated the decimation of the species . . . Massive hunting parties began to arrive in the West by train, with thousands of men packing .50 caliber rifles, and leaving a trail of buffalo carnage in their wake. Unlike the Native Americans or Buffalo Bill, who killed for food, clothing and shelter, the hunters from the East killed mostly for sport.  Native Americans looked on with horror as landscapes and prairies were littered with rotting buffalo carcasses.”

“The Texas legislature, sensing the buffalo were in danger of being wiped out, proposed a bill to protect the species,” King recounts. “General Sheridan opposed it, stating, ‘ . . . They are destroying the Indians’ commissary.’”[1]

Today, Solutionary Rail’s proposal for a new partnership between railroads and the public offers an opportunity to deliver some measure of redress, and a chance to partner with tribes to determine the future of railroad rights-of-way across tribal lands.

“Indian Tribes have historically been ‘colonized’ by energy companies; meaning that energy companies have a history of entering Indian reservations, often with federal government support,” writes the Affiliated Tribes of Northwest Indians Economic Development Corporation.  “Indian tribes as sovereign governments are now seeking to change the paradigm of their relationships with energy companies, and to become full partners in the use of their resources. Land is one of those resources and as such, tribes do prefer to use their land resources to become part of energy development rather than a victim of energy development.“[2]

Indigenous communities in the US continue to struggle from the impacts of conquest, but are renewing their cultural, territorial and economic sovereignty.  In many cases, tribal governments and cultural leaders are leading the way in the fight against the expansion of fossil fuel extraction and transport infrastructure by asserting their treaty rights and moral authority.

Coastal Salish canoe families, though not overtly political, have nurtured a cohesion between tribes in the Pacific Northwest that has bolstered the resistance to coal and oil trains, pipelines and export facilities.  In 2016, the Lummi Tribe in Washington State successfully asserted treaty rights to stop what would have been the world’s largest coal export terminal.  Also in Washington, the Swinomish Tribe is currently embroiled in a lawsuit over the non-negotiated expansion of oil train traffic through their land.  Also in 2016, representatives from over 250 tribes from across the continent gathered to support the Standing Rock Sioux of North Dakota in their struggle to protect Missouri River waters from the proposed Dakota Access Pipeline that would carry Bakken Shale oil.

The crux of the issue is reclaiming treaty-protected cultural and territorial sovereignty.  A long succession of court decisions and laws has undermined that sovereignty.  The General Allotment Act of 1887 led to a surge of white ownership on lands that had previously been under treaties, creating a checkerboard pattern that persists to this day. Through changes in laws the Secretary of the Interior gained increasing power to grant easements across tribal lands.  Railroad rights-of-way were the earliest. Laws passed in 1934 and 1948 began to restore tribal rights, and now tribal permission is required for new rights-of-way.  But many older easements remain because they were granted in perpetuity.[3]

The public benefit mandates under which a Steel Interstate Development Authority (SIDA) operates should require that no publicly financed improvements can occur on rights-of-way over tribal lands that have not gained tribal permission, neither track electrification nor power transmission. Solutionary Rail creates a significant opportunity to renegotiate if and how these rights-of-way on tribal lands are utilized in the future. Renegotiation provides an exit strategy from the regressive easements granted in perpetuity and an opportunity to right old wrongs with a new era of right-of-way justice.  The negotiation process can also help clarify issues surrounding checkerboard ownership.

As presented in an earlier chapter, the infrastructure that Solutionary Rail proposes offers many advantages for tribes seeking to expand renewable energy generation for local energy sovereignty and even more for those with aspirations to export power. Tribes may choose to leverage rail corridors to develop their own substantial wind and solar energy sources.  Some tribes may utilize this opportunity differently.

Principles for energy development on tribal lands adopted by a number of tribes should guide Solutionary Rail investments:

Tribes have other concerns over railroad rights-of-way.  Many rail lines run along shorelines, conflicting with restoration of habitat for fisheries and other wildlife.  Some lines, such as certain stretches of track along the Columbia River, interfere with access to traditional fishing grounds.  This results in tragic fatalities of American Indian fisherman attempting to exercise their treaty-protected right to harvest.  Other stretches of rail along the shoreline of Puget Sound undermine habitat for treaty-protected fisheries.

Honoring treaty rights and addressing the grievances of tribes is inevitable and necessary. Being publicly controlled, the Steel Interstate Development Authority (SIDA) that finances, builds, owns and maintains the new electrification and modernization infrastructure provides an opportunity for right-of-way justice with tribes as well as environmental sustainability.  Curving shoreline routes are not appropriate for the higher speeds envisioned under Solutionary Rail. In many cases, the relocation of shoreline rail lines will be necessary to mitigate the impact of rising sea levels. Moving tracks off shorelines to inland routes or higher elevations opens the way for large-scale habitat recovery for, and access to treaty protected fisheries. In the Puget Sound, this habitat recovery could support a more robust fishery without sacrificing an aquatic the reserve system, averting potential conflicts between tribes and environmentalists. Once again, Solutionary Rail can serve as a catalyst for addressing seemingly unresolvable conflicts by building a broad partnership, reconciling conflicts by recalibrating our infrastructure for a just and sustainable society committed to the well being of future generations.

In 2007, Tom Goldtooth introduced the Backbone Campaign to the seventh generation principle.  Most simply, it is the precautionary principle to “do no harm” applied across a span of seven generations.  This is conservation in its truest form. To consider the impacts of our actions today with this level of awareness adds a spiritual challenge to addressing policy challenges.  As the proposal blossoms as a campaign in the coming months and years, the Solutionary Rail effort aspires to meet that challenge head on to, as Tom recently said, “redeem railroads and a society addicted to their dangerous cargo.”