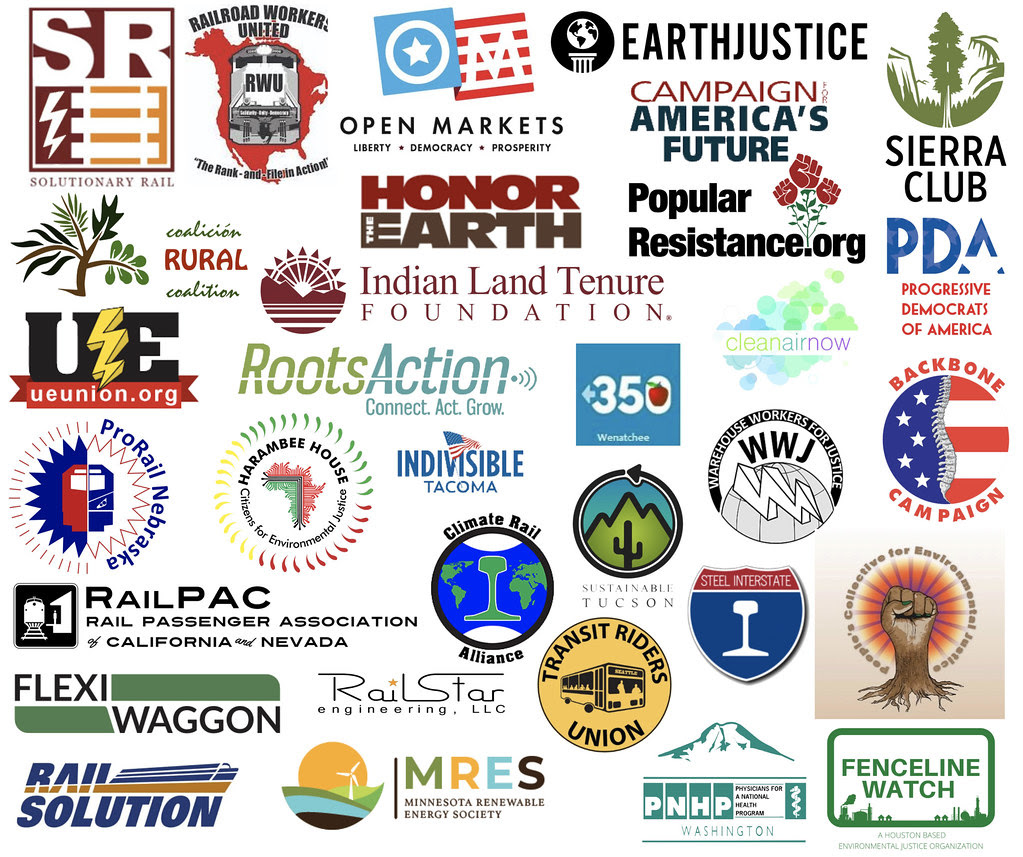 Washington, DC - Solutionary Rail (“SR”), a project that advocates for electrification and the expanded use of US railroads and rail corridors for greater public benefit, is in the process of  delivering this sign-on letter to the Surface Transportation Board Chairman Martin Oberman and other policy makers around the US Capitol. The letter thanks Chairman Oberman for standing up to the large Class 1 railroads and raising important questions about the adequacy of their stewardship for this critical national infrastructure.

In a recent speech1, Oberman criticized the seven major Class 1 railroad corporations2 for spending only minimally on capital projects, for regular upkeep of the rail infrastructure ($138 billion) but not substantial expansions or improvements to the system. Instead, payouts for stock buybacks and shareholder dividends were far larger, at $191 billion. Oberman asked his audience, “Where would rail customers, rail workers and the public be if a meaningful portion of that $191 billion have been re-invested in expanding service and making service more predictable and reliable?” 2, 3

SR considers Oberman’s bold public stance a historic opportunity to pivot the US approach to rail infrastructure away from extractive profiteering and toward investing in broad public benefits. The sign on letter was created to demonstrate to Oberman, his regulatory colleagues, and policy makers that this approach could generate support that transcends typical issue silos, false dichotomies about jobs or the environment and dangerous rural-urban partisan divides. The 35 national and regional organizations that endorsed the letter and the more than 100 individual leaders who signed on represent a diversity of policy advocates, political approaches and geographic representation that is rarely seen.

Signers onto the letter include labor, environmental, climate, and community based environmental justice organizations, from Railroad Workers United, Warehouse Workers for Justice, United Electrical, Radio and Machine Workers of America (UE) to Sierra Club and EarthJustice, to Harambee House/Citizens for Climate Justice, Indian Land Tenure Foundation, the Rural Coalition, Honor the Earth, People’s Collective for Environmental Justice from California’s Inland Empire, among many others. Add rail specialists, progressive policy, public health, anti-monopoly and renewable energy organizations and more than 100 leaders spanning all the above including world renowned climate activist Bill McKibben, and the letter becomes a testimony to how railroads literally and figuratively connect us all.

"It is high time that the Surface Transportation Board (STB) step in and put a stop to the Class One railroads' profiteering. While tens of billions in profits have accrued to stockholders, tens of thousands of jobs have been cut and service levels eroded. Fewer carloads are now transported by rail than 15 years ago. The carriers have been losing market share to inefficient and highly polluting trucks that clog and pound the nation's highways, as they shy away from handling "less profitable" freight. And in recent months, due to cuts to employment and infrastructure, they cannot even handle the freight that is available to them. Railroad Workers United supports STB Chair Oberman's criticism of the industry and urges him to take swift action" stated Ron Kaminkow, a locomotive engineer and the General Secretary of Railroad Workers United.

“We are proud to bring together this unconventional alliance representing a spectrum of geographic, policy and political perspectives,” said Bill Moyer, Solutionary Rail campaign director and co-author of the 2016 book of the same name. “It is essential that rail regulators and policymakers hear from all those impacted by our rail system - not just shippers.”

In his talk, Oberman said that if the seven Class-1 rail companies had seriously discharged their obligation as common carriers in the public interest – an obligation that still exists despite deregulation that started in 1980 by the Staggers Act -- they would now be a much more significant and efficient part of our transportation system than they are. He flagged that shipments by rail would be a less expensive option than shipments by trucking; instead, however, the costs by rail have increased 30% since 2004.

If, since 2006, the railroad companies had not let so much of their market share for freight go to trucks, and if they had not engaged in what they euphemistically call “Precision Scheduled Railroading” (PSR), 40,000-50,000 jobs would not have been lost in the last several years, Oberman said in his talk. If the railroad companies were balancing their profit motivation with their obligation to provide transportation services in the public interest, “the public would benefit with lower consumer prices, less highway congestion and less polluted air,” Oberman said.2

Solutionary Rail and the other advocates emphasize that rail system improvements which are achievable but which the major railroads have avoided are a climate solution hiding in plain sight. Steel wheels on rail tracks require one-third or less energy than cars and trucks on pavement. Consequently, shifting transport from highways to trains will reduce pollution and CO2 emissions. Oberman disclosed the scale of one CO2 reduction opportunity the rail industry has failed to seize:

“Since 2002, over 123 tons of global warming CO2 has been pumped into our atmosphere just because the railroads chose not to maintain their market share as compared to trucks. Imagine how much better we would be as a country and as a planet if railroads had not only not lost ground to trucks, but had outgrown trucks in picking up more of the growth in our economy and there would have been a greater cut in CO2 emissions. This pattern simply cannot be allowed to continue.”2

After 45 years of deregulation, the chairman of this little known but extremely important regulatory body is raising the alarm. He is publicly connecting the dots about how declines in rail service and capacity impact American jobs, consumer prices, congestion, pollution, climate, and more. Connecting these dots, he also offers the possibility of reversing that trajectory to increase benefits and reduce harms. Oberman’s holistic outlook on the real and potential impacts of US rail echoes SR’s message to policy makers to put rail at the gravitational center of solving problems together. Unlike SR, Oberman is in a position to do something about it immediately, and the letter requests that he do so.

The letter calls for “an interagency collaboration” to clarify the benefits of rail by analyzing available data on competing transportation modes (cars, trucks, planes & trains) and calculating their external costs to jobs, health, climate. The letter also urges regulations be adopted to fully restore railroad companies’ common carrier obligations, ensuring the “equitable, accessible, reliable, and affordable service” the law requires. This will be a bold policy move, but the letter says “we cannot wait for Wall Street to transcend its obsession with profits. The work cannot be delayed with half-measures or greenwashing by Class 1 railroads.”

Solutionary Rail delivered copies of the letter to transportation policymakers in Washington, D.C. on Friday, October 15th, including all STB board members, DOT Secretary Buttigieg, the Federal Railroad Administration and members of the House Transportation and Commerce Committee.  A PDF copy of the letter is HERE.

Solutionary Rail addresses the public interest in three major areas that intersect with rail: modeshift of freight (and passengers) from roads to rails; the electrification of trains; and the utilization of railroad rights of way for the efficient transmission of renewable energy, such as the National SuperGrid.  For more info, including a 3 minute introductory video and a free pdf download of the 2016 book, go to SolutionaryRail.org