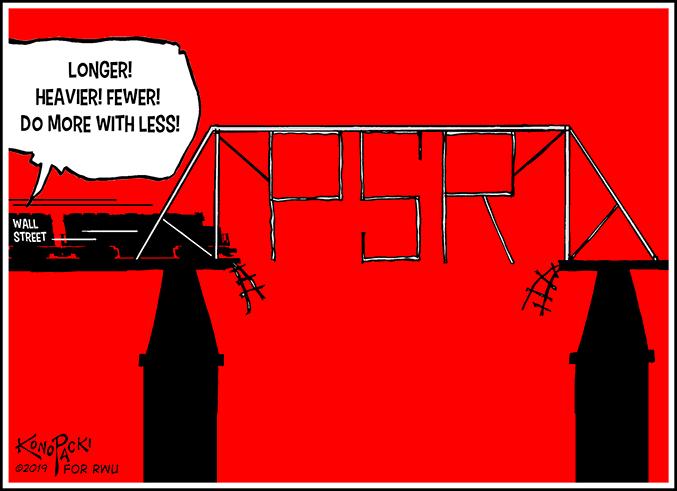 The current railroad industry is not operating with a business model that prioritizes the long term health and vitality of the US economy, environment, or even of the rail industry itself. “Precision Scheduled Railroading” (PSR) is a euphemism for a railroad industry practice that ensures short-term profits for the benefit of the “Wall Street Jackals”, at the expense of the safety and vitality of a great American railroad.

Despite its name, PSR:

What is “Precision-Scheduled Railroading” (PSR) and what is its real impact?

PSR began as an industry practice around 2000 and has now expanded to most North American Class One railroad operations. PSR mandates freight trains run on a regular, set schedule. Of the six Class One railroad companies in the U.S., only BNSF has not adopted PSR – and BNSF is the only company whose safety record improved in 2018.

For manufacturers and farmers, PSR is not leading to more reliable schedules. For example, a Tennessee Pringles factory was nearly driven out of business due to delays in shipments, a Kellogg plant had to suspend production entirely, and federal intervention was required to get grain moving from farms in Florida.

For railroad workers, PSR’s business model prizes maximizing profits by any means necessary: lay-offs and shorter turn-around time for train and track maintenance, increasing demands on the remaining workers’ schedules. In the first two years after Class One company CSX implemented PSR, it fired 22% of its equipment maintenance workers, 16% of its train crews and 11% of its maintenance-of-way employees. Where equipment workers once worked in pairs, they often now perform the same jobs alone. Two-person crews move even very long trains of 100+ cars – and there is pressure from the industry to reduce crew size to 1! Workers who remain after job cuts have been forced to do more with less, sometimes performing jobs and inspections for which they are not trained.

For communities, PSR means a decrease in family-wage jobs and longer trains – up to 3 miles -- blocking the movement of people and vehicles in towns and cities as the trains snake their way through. This is an impediment to emergency services in communities. The railroad industry jeopardizes public safety in other ways, cutting corners on inspections and pushing crew members to the edge of fatigue. The devastating 2013 train disaster in Lac Megantic, Quebec, was the result of the railroad industry’s cost-saving business model that insisted on a single-person crew to drive a long and heavy train carrying extremely flammable fossil fuel. There have been near-misses in the U.S. – for example, in the Columbia River Gorge in 2016.

An article by the Transportation Trades Department, AFL-CIO, a coalition of 33 member unions, “Precision Scheduled Railroading Threatens to Gut America’s Freight Rail System” (October 29, 2019), summarized, “(PSR) works for the few – wealthy investors who have little concern for anything other than their bottom lines. These investors are fickle, and when they have extracted every last cent out of the railroad industry, they will move on to the next sector. Meanwhile, we will be left with a hollowed-out system that does not serve its customers, has abandoned safety, and has pushed out thousands of skilled workers who may never return. This trajectory can be changed, but doing so will require active engagement from Congress and federal safety and economic regulators…”

Solutionary Rail asks that you share this info with your representatives and with members of the House Transportation and Infrastructure Committee and the Senate Commerce Committee. Let them know that long-term rail viability and safety are important to you, and railroads must have better safety and economic regulations, especially because of their common carrier status. A great tool is the Solutionary Rail video, as well as this and other RailBites in the series.

Legislators and policymakers have a lot of information to sort through -- we hope our “RailBites” will help you gather essential information about modernizing and electrifying our transportation infrastructure. Please use us as a resource! Contact [email protected] or 206-408-8058.