We Stand in Solidarity with Railroad Workers

Sign onto this Statement of Solidarity with US Railroad Workers 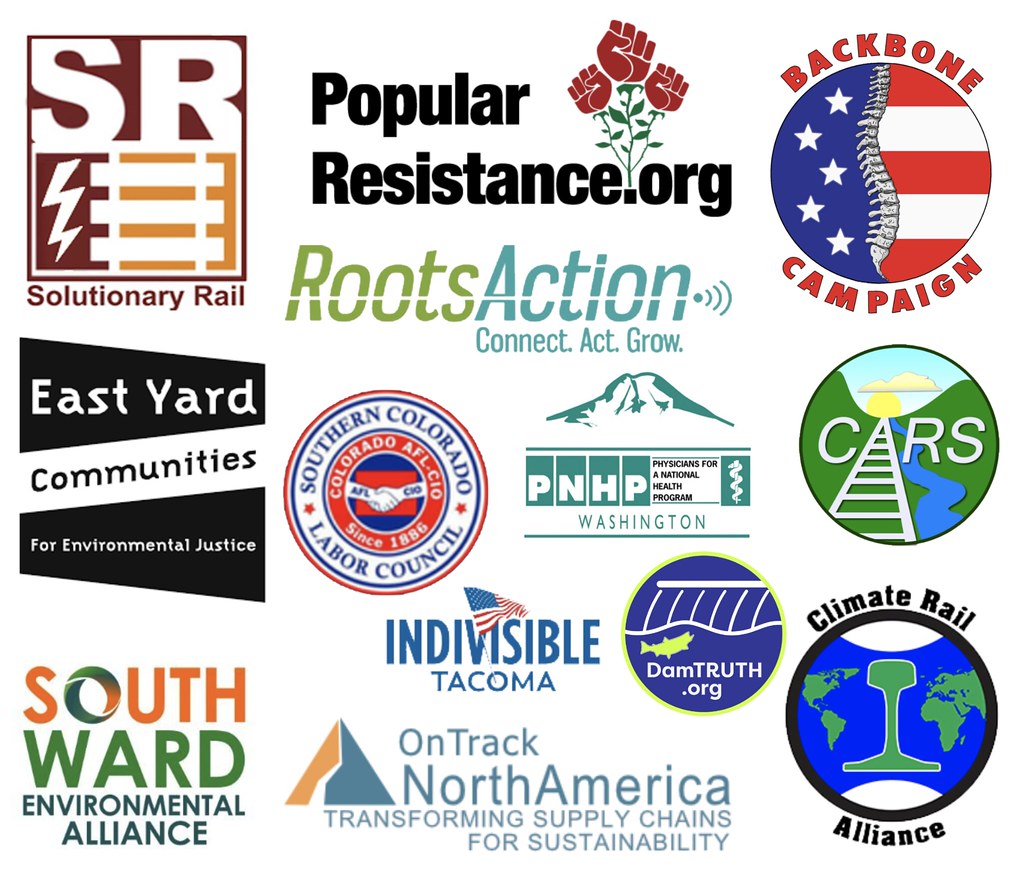 [A railroad strike was delayed, but not prevented by the exceedingly inadequate tentative agreement negotiated on the eve of the strike. As railroad workers reject this agreement, and wait out the next "cooling off" period, once again a strike is likely. We now have time to organize to show our solidarity.]

If/when there is a strike by railroad workers, it will be due to the misguided and corrupt priorities of Class 1 railroad owners and management who have prioritized short term profits over service, capacity and long term resilience. Class 1 railroads are all publicly traded corporations  - or in the case of Buffett's BNFS, owned by the publicly traded Berkshire Hathaway. Thus, they have been captured by investors' obsession with profit maximization through lowering operating ratios - i.e. cutting costs and serving only the most profitable shippers.

Railroad workers have been without a contract or a raise in more than two years. During the last few years they have been subject to difficult working conditions and long hours with limited time off. They have been laid off, furloughed, and forced out of  the industry in unprecedented numbers.

Things are at a breaking point, and workers have been pushed to the point of striking by the unreasonable demands of management.

Class 1 railroads are doing less, with less for fewer customers, in order to increase short term profits for shareholders. The result has been record profits despite deteriorating service. These publicly traded corporations would rather slash and burn our nation’s railroad infrastructure to make fast money for a few, than invest in the long term profitability and resilience of the system they are obligated to steward. They refer to this business model as "Precision Scheduled Railroading" despite it having nothing to do with either precision or schedules.

Inability to provide timely service that meets customer needs – one of the consequences of Precision Scheduled Railroading – is driving customers away. This amplifies  supply chain issues and  leads to more trucks on the highways, and increased air pollution, road wear and tear, congestion and accidents..

Railroad owners are profiting at the expense of workers, communities and the environment without regard to their historic obligations to the public good and national interests. The time for a change is now.

Solutionary Rail supports railroad workers as they negotiate for a fair share of the profits they make possible a safe work environment without intimidation, and for schedules that allow them to live dignified lives and the ability to sustain their and their families' well being.

Solutionary Rail honors the work and leadership of railroad workers who serve on the frontlines of defending workers, shippers, communities, and our nation’s interest in robust, resilient, and sustainable rail transportation. If they deem it necessary to use the tool of a national rail strike in order to set a new course, we honor that sacrifice and will stand in solidarity with striking railroad workers.

Our common cause with railroad workers is rooted in our shared aspirations for the future of railroads to provide clean, sustainable and reliable transportation in service of all. This includes:

Solutionary Rail affirms a shared vision for the US where railroads play a vital role in delivering solutions for 21st Century crises: getting carbon out of transportation, connecting clean renewable energy to the entire country, providing better freight and passenger service to urban and rural communities, and revitalizing rail corridor communities. None of this is possible until railroad management starts treating workers as partners and not as adversaries. It is time that Class 1 railroads adopt a vision that prioritizes long term growth, worker and public interests over Wall Street's insatiable greed.

Add your name and/or organization to this letter below. PLEASE email your organization's logo to [email protected]]